Stargate Universe Cancelled:
The series has 10 episodes remaining in its second season and Syfy will air these episodes as planned next Spring.

The fault lies not in our stars but in ourselves. -William Shakespeare

Brad Wright would like people to believe SGU was cancelled due to some kind of conspiracy. By SG-1 fans, Stargate Atlantis fans, or maybe the C.I.A. . Executive producer and co-creator Brad Wright said - “I think getting moved on the schedule has hurt us. And the fact that some of the fans that liked SG-1 and Atlantis were so angry that they have deliberately hurt us, which is unfortunate.”


It had nothing to do with a conspiracy by the fans. It had to do with one thing and one thing only. The fact that Brad Wright has his head stuck so far up his rear end, he is unable to see when he has made a mistake. Do you guys remember New Coke? Back in 1985 Coca-Cola changed the formula of Coke.  And everyone hated New Coke.  So what did the company do.  They admitted they made a mistake and returned to the original formula.

Brad Wright changed the formula of Stargate, and the fans did not like the new  formula.  So what did Brad Wright do? Did he say OK I made a mistake and will change it back? No, he said the fans need to just shut up and watch  it.  He said , I do not need you guys, you are the wrong demographic .

Not Stargate and not a good show .

Stargate SG1 and Atlantis were both family friendly shows, SGU  is not. Many people were sitting with their kids to watch the first episode and got shocked by what they saw. SGU was less Sci-Fi  and more soap opera. With too much whose the baby 's daddy  drama. And Destiny’s true mission? Well it's just true far out there.

The show being cancelled is no reflection on the cast and crew.

Myself and many others  disliked some of the characters  of the show.  But not the actors  they played them. No love for Camille Wrayor or Chloe Armstrong. But great respect for the actors that played them. Both actors did a great job. But the storyline for there characters was just not there. And the people who created the Destiny ship did a great job.  And there are many cast and crew members whose name I do not know. All you guys did your job well.

And if I my I would like to give a shout out.

To Julia Benson aka 2nd Lt. Vanessa James and Jennifer Spence aka Dr. Lisa Park. You both have many fans out there. The  sex scenes  were too  too graphic for the show. But I know as actors you have no say in that.Vanessa James and Lisa Park are very welcome new members to the Stargate Family and hope to see you both again in the future.

Posted by Kincaid at 8:45 AM No comments: 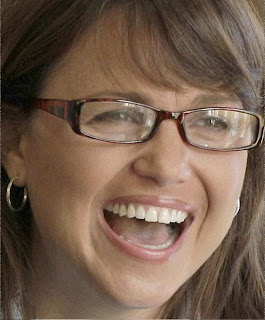 
So when talking about Christine O'Donnell why do I start with a quote from Sun Tzu's The Art of War? Because for the past few weeks CNN,CBS and  others in the national media  have been doing a real hatchet job on Christine O'Donnell . They have been going after Christine O'Donnell 24/7. They have been talking and writing about her.  But they never talk about the Christine O'Donnell  Campaign Platform. That's because they can not win they way. They can not win in a far fight, so they have to get low down and dirty. And never combat Christine O'Donnell  on issues facing the nation or the state of Delaware. Instead they misinform and just downright lie to the American people. Which is nothing new. In fact it seems like most of the times it is their standing operating procedure.CNN has basically  sold it's soul to the devil  anyway. Eliot Spitzer , seriously ? Eliot Spitzer  has his own show on CNN. I do not think CNN ever had a soul to start with. If i worked at CNN I would have to hold my head down in shame.  How could you call yourself a professional journalist when you work  with a piece of crap like Eliot Spitzer ? Jeffrey Toobin  and Eliot Spitzer should do a show together,  that would be a perfect match. And let's not forget that for many years CNN had Rick Sanchez. Rick Sanchez is a racist  who thinks that Jews rule the world.


I have no idea why some holy than thou people are trying to make a big deal of the witchcraft thing. She was just a kid in high school  goofing around. It's like they are saying, lets focus on this very,very small period of time. And we should just forget about the 20 to 30 years she dedicated to conservative christian ideas. It's just ridiculous to even talk about this. Every time, every single time  someone talks  about it.  It makes me think that very funny scene from  an episode of, The West Wing.

ZACH: "And this is really important."

ZACH: "You mind if I give you a suggestion that may make this go faster?"

ZACH: "If you dunk the suspect in a deep well of water, and they drown, it means they're not a witch."

ZACH: "I saw Lizzie Proctor speaking with the devil!"


The U.S. Senate  is called the "millionaire's club"

Christine O'Donnell may or may not of had some money problems in the past. Some of what they are saying in the media is not 100% true. Some of what they are saying are just complete lies. Even if she did have some financial problems in the past I would not care. In fact it might make me want to vote for Christine O'Donnell even more. It would make me feel that she is more able to understand,  the problems  that I and so many others had to do  with. I would rather vote for her  than another super rich  millionaire  lawyer. Almost half of the members of the Senate are millionaires.  Of the 100 members of the  U.S. Senate, 57 of them are lawyers.  And let us not forget that the President Obama is also a millionaire lawyer. Albert Einstein  said that Insanity was " doing the same thing over and over again and expecting different results." Why do the American people  keep voting for millionaires and lawyers, and except things to change?

Why is it always OK to attack, mock and ridicule   the Conservative Christian Faith?  If anyone attacks the  Islamic faith, the world stands up to condemn them. And that is how it should be.  But it seems no one says anything when people attack the Christian faith. A lot of people believe in creationism. A lot of people believe that mankind was created by God.  So why is the media try to make it seem that you have to be crazy to think that God created people? Many people who believe in this will never say so. Because they are afraid of being attacked.  I believe that people should have the freedom to express their  religious belief whatever they might be.

Bill Maher can only have a show on cable tv. He was kicked off network tv because his commits on 9/11. Bill Maher thinks that the terrorist that killed thousands of men, women, and children on 9/11 are "Brave". And that the men and women in the military are cowards.  It is sad and frightening that person like that might be able to influence elections. Why is it the media says nothing about Bill Maher's hate speech?  But if Christine O'Donnell makes an innocent joke about meatballs, they act as if it's a big gotcha moment. Like it's Watergate or something. Seriously, they think that is news?


Abraham Lincoln said, "Neither let us be slandered from our duty by false accusations against us, nor frightened from it by menaces of destruction to the Government, nor of dungeons to ourselves. Let us have faith that right makes might; and in that faith, let us, to the end, dare to do our duty, as we understand it."


Nisi credideritis non intelligetis
Posted by Kincaid at 11:59 AM No comments:

Email ThisBlogThis!Share to TwitterShare to FacebookShare to Pinterest
Labels: Christine O'Donnell, opinion, politics, religion
Location: Washington D.C., DC, USA
Newer Posts Home
Subscribe to: Posts (Atom)
I never considered a difference of opinion in politics, in religion, in philosophy, as cause for withdrawing from a friend. -Thomas Jefferson