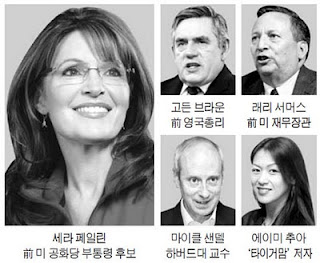 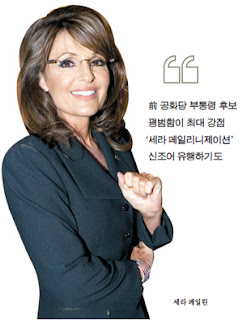 Sarah Palin will be a speaker at the World Knowledge Forum in South Korea. This is the 12-year anniversary of the World Knowledge Forum . The topic this year is the New Global Economy Crisis. The event will be October 11 to 13 . Palin a good represent says Indian economist at the University of Chicago Professor Rajan .The American public no longer trusts the government or Wall Street, but instead prefer ordinary people such as Palin' Professor Rajan said. He referred to Palin's popularity as commonplace. She does not represent the elites. But this Palin strengths of the ordinary, is catching the popularity Professor Rajan said. Palin daughter at age 18 became a mother. Plain had a son in Iraq . The youngest son has Down syndrome, she is an ordinary American. And it is that  power that made her such a great  vice presidential candidate.  -news source mk 뉴스

This is the Bio of Sarah Palin that the World Knowledge Forum has on there website.

Sarah Palin first made history on December 4, 2006 when she was sworn in as the first female governor of Alaska. In August 2008, Senator John McCain tapped Palin to serve as his vice-presidential running mate in his presidential campaign, making her the first woman to run on the Republican Party's presidential ticket. In Alaska, her top priorities included fiscal restraint, limiting the size of government, resource development, education, equitable oil valuation.Palin is a contributor for FOX News where she offers her political commentary and analysis across all FOX News platforms, including FOX Business Channel.She is the author of The New York Times best-selling books, Going Rogue: An American Life (November 2009) and was named to TIME magazine's 2010 "100 Most Influential People" list.