Sarah Palin Is A Genius 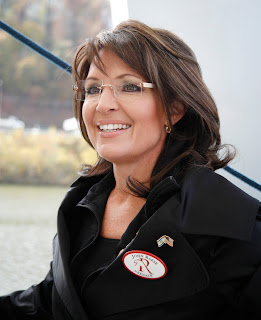 Sarah Palin may have already won the Republican Presidential race for 2012. She might have won the race by not being in it. Waiting as long as possible to join the race is a genius move. She could show up at the last minute and win the big game without breaking a sweat. Why waste time and money when you could just sit on the sidelines and watch your opponents self destruct.

No need for Sarah Palin to go up against Newt Gingrich.  Newt Gingrich has been in self destruct mode for the past week. Having to apologize to Paul Ryan and other stuff. Newt Gingrich is his own worst enemy. And now with this stuff coming out about Arnold Schwarzenegger and Mildred Patricia Baena. It's going to put a bigger spotlight on the fact that Newt Gingrich cheated on his first and second wife. Newt Gingrich makes John Edwards look like a good guy.

The only person who does not know it's over for Mitt Romney is Mitt Romney. The speech he gave on Romney Care was a self destruct moment. If you take that and add his flip flops on abortion. You can put a fork in Mitt Romney because he is done. But Mitt Romney is very rich and delusional. So he might stay in the race for as long as he can.

Herman Cain the pizza guy. Can he deliver for you in 30 minutes or less? I don't know because he has never won an election in his life. He has lost an election before in his home state of Georgia, but have never won an election. So I think it is a little odd for some to think the first election Herman Cain will win is a presidential election. Herman Cain supporters say he is a great business man. Wall Street is full of great business men who would sell their own mother for a buck. There is a lot of buzz about Herman Cain. People like the way he talks. The guy has been a talk show host for the past couple of years. Of course he is good at talking about stuff. Obama won an election because he was good at talking about stuff, you see how well that worked out. Cain has some big names like Erick Erickson and Neal Boortz supporting him. These are all anti Sarah Palin people. Most people have not even heard of Herman Cain before. To think that a nobody could build up enough support to defeat Obama is insane.

For the past couple of months the so called political experts have been saying Sarah Palin needs to get in the race now. Saying that she needs to be at CPAC or this debate or that debate. Saying that she needs time to build up support and raise money. They are all wrong. The only thing Sarah Palin has to do is show up and ask for the republican nomination. Yes she got it like that.

So what does Sarah Palin bring to the table. Everything and I do mean everything.

Jewish Voters: When it comes to Jewish voters no one is comes even close to Sarah Palin. United States relations with Israel are the worst they have every been. Sarah Palin is the only one who can fix things.

Catholic Voters: Catholic pro life groups were more involved in the last presidential election than ever before. Even some Catholic priest were speaking out against Obama. I see Sarah Palin as the clear choice for them.

Latino Voters: By her self Sarah Palin does better with Latino voter that most republicans. With help from people like Marco Rubio and others she could pick up at lot of Latino voters. Something no one else in the republican presidential race can do.

Female Voters: In case you haven't noticed Sarah Palin is a woman.

Gay and Lesbian Conservative Voters: While so many others were boycotting CPAC because of GOProud. Sarah Palin stood up for their right to be there.

The Sarah Palin Network: Everyone else has to run around from talk show to talk show and beg for air time, but not Sarah Palin. She can post statement on Facebook or video online. And within minutes every news outlet on earth is replaying it and talking about it. Yes she got it like that.

Sarah Palin's Alaska:  The show was a genius idea. You can only tell so much about a person from a speech or interview. Seeing her mom, dad, brother and seeing how much the people of Alaska love her. The woman who named her son Palin, this all made me like her even more.  And if she runs I am sure a lot of people will be buying the dvd to take a look at it.

According to the Art of war


Every battle is won or lost before it is ever fought.- quote by Sun Tzu


In his article  called A Conservative's Case for Sarah Palin's Genius this is what Tony Lee said about Sarah Palin.

I think liberals and those in the mainstream media fear her. Sure, they openly say she has no chance of beating President Obama - if she even runs, that is; but, inside, they must fear that she could very well beat President Obama in a one-on-one match-up.

Poll: Which 2012 Republican candidate is best for Israel?

Sarah Palin may be more “Catholic” than some Catholics

Sarah Palin and GOProud: Gay and Conservative Do Go Together